Water meth injection can be used in turbo charged engines to cool down the air from the compressor before it enters the cylinders.Â  The resulting air-fuel mixture is less likely to knock (abnormal combustion) and so the system can be adjusted to increase power.Â  As previously mentioned, adding water/meth to the system without further adjustments to the fuel and ignition maps will actually result in lower power output from the engine.Â  To get the extra power from the engine, fuel map need to be leaned out, ignition advanced, and boost increased (if turbo is capable).

Great, more power.Â  Now, what happens if something were to happen to the water/meth system?Â  If the jet is clogged, or the hose spring a leak? With the lean fuel map and higher ignition advance, lack of water/meth when it is expected would likely lead to engine damage.

Luckily most water/meth systems have a fail-safe function built in to detect these fault conditions.Â  Once detected, the system would bypass the boost control and force it to run at “wastegate boost”, or the lowest boost that the turbo will run.Â  Typically, the car would be tuned at wastegate boost on pump gas only, for when the fail-safe system is active.Â  The high boost zone would be tuned for water/meth.Â  The graph below is an example of a setup that runs ~8psi of wastegate boost.Â  The high and low boost areas are well separated so the ECU can be tuned to run in those two different zones effectively. 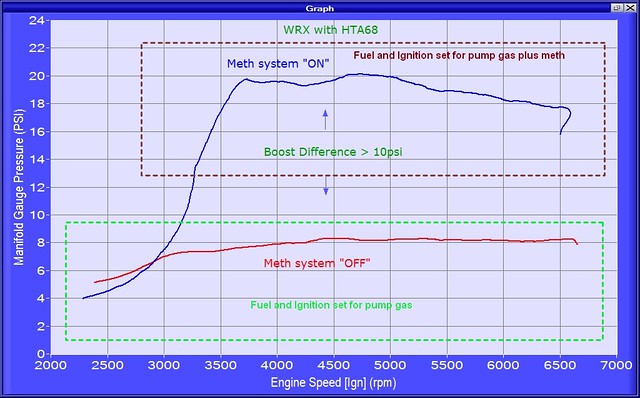 Boost creep is essentially unintended boost when the wastegate cannot bypass enough exhaust gas to prevent the compressor from building boost.Â  Shown below is the boost plot for an STI with catless exhaust.Â  With wastegate duty cycle set to 0%, boost creep is apparent, with boost rising from ~8psi to 14psi.Â  The severity of the boost creep will change depending on the ambient air temperature and elevation (worse at low elevation and cold air temp). 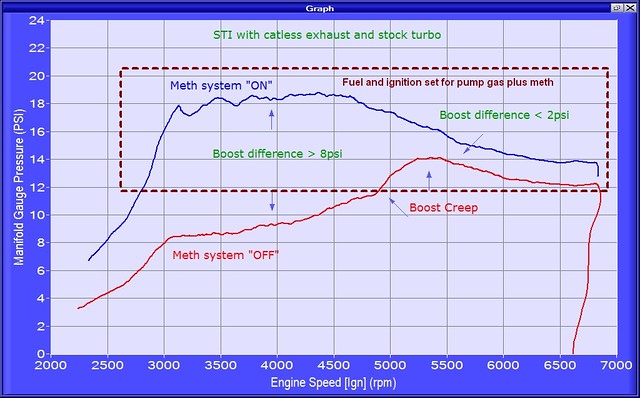 With boost creep present, dropping to “wastegate boost” after fault detection will not provide the needed protection for the engine since the boost can climb as high as the “high boost, meth ON” setting.Â  To reduce/prevent boost creep, the exhaust housing on the turbo can be ported to improve flow through the wastegate.Â  Another method is to add an external wastegate.

Just something to consider if you are thinking of adding water/meth injection.